Since lockdown measures were instated in Boulder, Colorado around 16th March, Jason and I have been eating exclusively at home. Aside from grabbing groceries at the store or walking our dogs we really haven’t left the house – which has been surprisingly great in terms of our nutrition and general well-being! We’ve been walking more, we’re getting more sleep, we’re moderating the intensity of our workouts much better because we have minimal equipment at home and, despite financial stresses like the rest of the world is facing with all this uncertainty, this is probably the most relaxed we’ve felt in a long time! Slowing down our pace of life and living more simply has been extremely eye opening for us.

Although there’s been lots of change, some things have stayed the same, like my typical craving for pizza after eating the same meals over and over again! And so after weeks and weeks of preparing my own nutritious meals, it wasn’t unusual that I found myself hunting through uber eats for a seriously yummy looking pizza! Many local eateries had been safely offering curbside pick-up or delivery for a while, but being a bit of a food snob, I’ve never really been in to take-out. Why you might ask? Well because if I’m going to eat something prepared by someone else, I want to enjoy it when it’s fresh out the oven or off the grill and not 30 minutes later when it’s cooled down and needs reheating. I’m sorry but if you’re one of those people who enjoys your food luke warm or thinks it tastes better once it’s been reheated, then we probably won’t be friends. So far my husband’s the only exception to the rule! Of course I’m getting him to come around to my way of thinking. 😉

The Sink popped up as an option and honestly just about everything on their menu had my mouth watering. But as soon as I mentioned buffalo chicken pizza Jason jumped on board and made an executive decision that we order one to share – I was too hungry at this point to be making any decisions! Thankfully, it did not disappoint! Jason claimed it to be in his “top 3 pizzas of all time” and honestly the pizza crust was one of the best I think I’ve ever tasted. It was a honey whole wheat dough with The Sink’s trademark “ugly crust” which made the edges extra raised and super tasty. Feast your eyes on this!

As we were devouring the pizza, Jason, thinking out loud to himself, started saying how it would really be quite simple to make this pizza and that we could probably easily recreate this doughy deliciousness. Of course when he said ‘we’ he meant me. But I agreed and recalled how I’d seen some pizza dough at Whole Foods recently and that we could definitely make it macro-friendly with the Noble Made buffalo marinade and Bolthouse Farms ranch dressing. Well if you know Jason at all, you’ll know that he only needs you to be 1% on board with an idea for him to start setting deadlines. Before we’d even finished the pizza he had already declared a pizza-making evening to follow in 2 nights time. Luckily I have a lot more time on my hands now than normal, so even though I knew the joint pizza-making event would result in me doing all the grunt-work, I agreed to his plan. And this was the result! 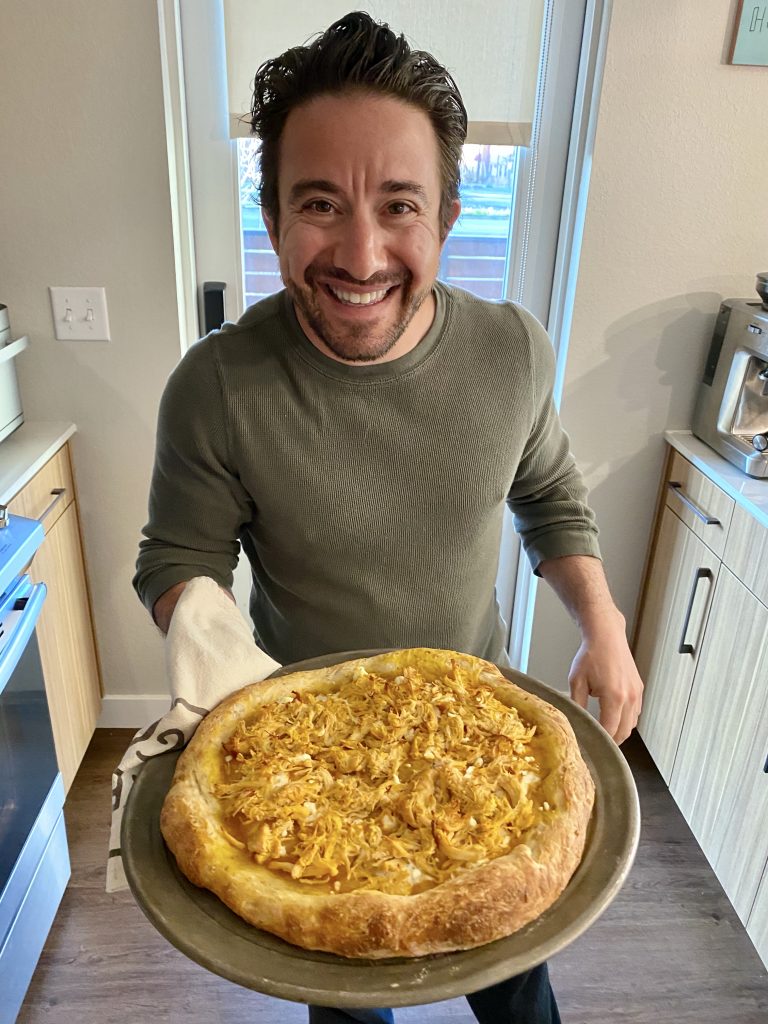 Of course you could make the dough yourself if you have yeast and flour (both in short supply currently) and that way you can sweeten it up with some honey. YUM! But honestly the dough from Whole Foods was really tasty, and definitely saves you a decent amount of time.

Give this recipe a go and tweak the ingredients as you need. We hope you enjoy it as much as we did! 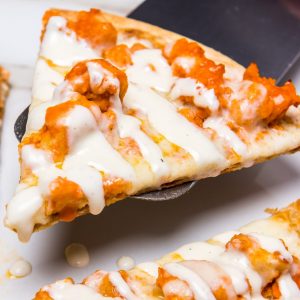