Gun to Your Head

Have you ever woken up with a gun pointed at you? Let me tell you about the time this happened to me.

If you’ve never lived in upstate New York in winter then you’re missing out. Just kidding! It’s cold as shit and pretty darn miserable. Four to five months of the year are grey, cold, and disgusting. Dirt and slush stick to the bottom of your pants, it gets in your house, it gets everywhere! This was 90% of why I decided to move to Florida. But before that I lived in Albany, New York.

After college I started teaching all sorts of aerobics at the local “globo” gyms. From cardio kickboxing, to pilates to step. Yes, this CrossFit L4 coach used to teach step aerobics! Let me tell you, my grapevine is tighter than Ms. Fonda’s butt in a spandex leotard! 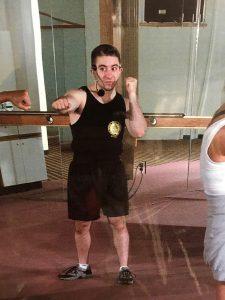 My favorite class to teach by far though, was spin. I’d line up my favorite tunes, blast the volume on the boombox up to eleven, and yell like a lunatic! People loved it! My energy seemed to draw in all types of gym-goers and I wound up having quite the following. No one was getting on the Jay Train unless they were signed up 48 hours in advance!I liked to think of myself as the lead singer of a rock band and my spin students as my groupies, because let’s be real, at 6am on a cold, dark morning in Albany the last place you truly want to be is a smelly and tired-looking spin studio. No, people were there for a show and that’s what I gave them. In a day and age where people were still using cassettes, I was one of the first to use an mp3 player so I could constantly mix up my music. Unlike my contemporaries playing the same boring techno, I was blasting classic rock, bands like Dave Matthews, Journey, and Jimi Hendrix.

The music pulled people in. But I think it was my obvious love for teaching the class that kept people coming. I was teaching nearly 15 spin classes a week, often 2-3 classes on any given day, bouncing around town from one gym to the next. Every day at 4:30am my alarm would jolt me out of bed so that I could make that first 5:30am class every day.

So anyway, let’s get back to the gun.

It was a Wednesday morning, I remember because I was super tired from staying up late the night before watching the newest episode of Law and Order. (Bom Bom)

I had my morning schedule down to a tee: alarm goes off at 4:30am, out the door by 4:45am, at the gym at 5:00am and teaching at 5:30am on the dot. This particular morning was like any other and I was going about my routine as normal, busy bundling myself up from head to toe until I resembled the Michelin Man. It was January in Albany after all.

I lived in a tiny little basement apartment, that wasn’t meant to be lived in. The ceilings were literally 5’5” high. I know this because I could walk around comfortably, but if I had friends visit they would have to stoop forward, like I’ve observed people of average height do on airplanes or when camping. You could also hear everything that went on upstairs…and I mean everything.

Have you ever had a moment in your life that happened so quickly it almost flashed before your eyes, but that you remember so vividly? Where every tiny, insignificant and intricate detail plays out in your mind like some kind of action slow-mo, no matter how much time passes? This is that moment.

Leaving the house, I walk up my basement stairs. Like every morning, I was momentarily blinded by the flash of the motion detector light illuminating. Instinctively I looked to my right to avoid the glare, which happened to be the direction of the street where I had parked my car. My eyes were burning and my face stung as the cold hit me like a slap to the face. It took me two, maybe three steps before I noticed something weird. Someone was sitting in the drivers seat of my car. I froze as we locked eyes. My wits not quite being with me, it took me a moment to realize what was going on.

He had on some sort of ski mask and winter hat, so all I could make out were his eyes. He was staring directly at me.

In that same moment it took me to realize that someone had broken into my car, the man in the ski mask was now pointing a gun straight at me. All of a sudden, time began moving slowly, as if allowing me an opportunity, some sort of grace period in which to react. I took that moment and reacted instinctively. Turning my back on the gun and the man in the ski mask, I flew back down the stairs to my basement and called 911.

I waited anxiously for the police as I tried to process the scene that had just unfolded. Had I just stared death in the face?

By the time the police arrived my stereo was gone and so was the man in the mask. 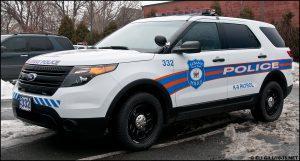 Before now, I hadn’t shared this story with many people. Truth be told I haven’t even thought about it for years. But recently someone asked me, “When did you know that you would make working in health and fitness your career?”

I was living in the slums of Albany because I had graduated college and knew I couldn’t (and didn’t want to) move back home with my parents. Working at Gold’s Gym making about $7/hour, the only apartment I could afford was $400/month and it included everything. I was too proud to ask for help and in any case, I was content with what I had; my own place, a girlfriend, and a TV. What else did I need?

Of course, I was naturally a little envious of my friends. Not because they were living with their parents but because this was the year 2000 and the financial world was booming! Straight out of college most of my friends were making over six figures and I was literally living off about $800/month. But I knew, with every spin class or personal training session I taught, it was better than all the money I could earn sitting at a desk 60+ hours a week. Day-in and day-out, I was doing something I loved and I was happy.

We all know how this story ends, he gets the girl (although a different one and years later) he is wildly successful doing what he loves, and slowly but surely changing the world.

But back to that question, “When did you know health and fitness would be your career?” It was that morning the gun was pointed at me.

You see, I wasn’t upset about the radio that I couldn’t afford to replace. I wasn’t even mad that I felt like I was driving around in a solid block of ice because the broken window cost too much to fix.

What I was most upset about, was the thought that I would miss teaching that morning’s spin class. That my students would show up and their teacher wouldn’t be there to teach. The thought of disappointing my students gave me cause for pause. For a split second, in that moment before my instincts made me turn and run back into my house, I had actually considered approaching the gunman.

Luckily, my survival instincts kicked in and I’m still here to tell the tale. Thanks also to some fast action by the Albany Police Department, my students got lucky that morning too I was still able to make it to my spin class on time!

Jason Ackerman, a 2014 winner of the ’40 under Forty’ business award by Albany Business Review

I tend to ramble when I type and my point can lose a little clarity! But I hope, if anything, my story can serve to offer you some encouragement. Whether in your career, a relationship, or on the scale. We will all at some point in our lives, experience those moments where you feel like you have a gun held to your head – hopefully this is only ever figuratively and not literally! Life becomes stressful as we constantly face and struggle balancing competing priorities. But it is in those moments of stress and crises that we recognize we have a choice.

Do we quit and move home with mom and dad?

Do we give up on our dreams because everyone around us seems to be more successful?

Do we call it a day simply because someone stole your car stereo?

So if you’re still reading this, I encourage you now to consider five things you truly value in this world. Is it it your health? Relationships? Meaningful work? Creativity? At the end of the day, you get to choose how you live your life. We only get one life and your personal fulfillment depends on it.

I’m not special or unique. I’m just a dude that was willing to choose my own path and I know you can do the same.

Wanna hear more about Jason’s life as a Jack of all trades gym instructor?

Check out Episode 2 of the Own Your Eating Pocast!